After the mysterious death of Elisa Lam, it’s time for another story guaranteed to make you piss your pants – and that’s the tale of ‘The Expressionless.’ 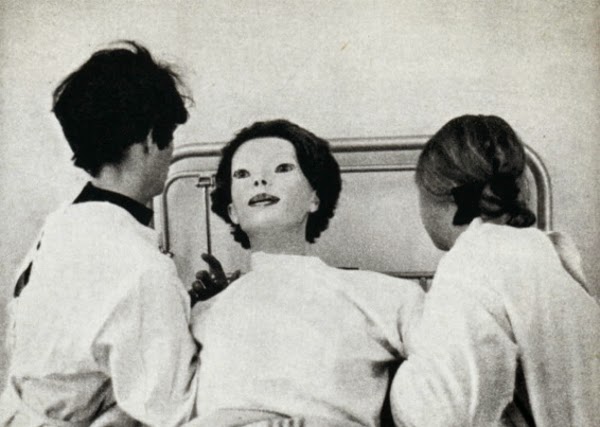 ‘The Expressionless’ tells of an incident in June 1972, where a woman appeared in Cedar Senai hospital wearing nothing but a gown covered in blood.

While bloodied patients aren’t uncommon in the hospital (as accidents often happen near the area), two things made her stand out from the rest.

The first was that her face resembled of that of a mannequin: flawless, without eyebrows, and caked with makeup.

The second is that she had a kitten clamped in her jaw, with fresh blood trickling down her gown and the floor. She later pulled the animal out of her mouth, threw it aside as if it was nothing, and collapsed on the floor.

From the moment she appeared at the hospital’s doorstep up until she was taken to her room, she remained completely motionless and expressionless.

Creeped out by her unresponsive state, the staff decided it was best to sedate her until the authorities could arrive. But the second they tried to, she fought back with extreme force.

Her body rose from the bed, with her face carrying the same vacant look.

While the staff tried to restrain her, she turned her emotionless gaze towards the male doctor, where she did something unusual.

And as she did, she revealed a set of spiked, inhuman teeth. Her grotesque appearance shocked everyone, including those who where trying to restrain her.

Stunned, the doctor asked: ‘What in the hell are you?’

Still smiling, she continued to observe the doctor, until he was distracted by the hospital security’s incoming footsteps.

Seeing the opportunity, the mystery lady suddenly leapt forward and sank her teeth into the doctor’s neck, ripping out his throat in the process.

The doctor fell to the floor, choking in his own blood. As he slowly gasped his lasts, the woman leaned dangerously close to his ear and whispered:

The last thing that the horrified doctor would ever see was his ‘patient’ feasting on the hospital’s security staff.

One female doctor survived and nicknamed her ‘The Expressionless’.

This infamous creepypasta has proven to be one of the most popular stories in the history of the Internet. In fact, there’s even a short film which faithfully depicts the events of the original story.

From validating kids’ emotions to healing one’s inner child: Another blue dog is influencing the next generation

BTS’ j-hope has an upcoming documentary on Disney+

Clara Umali - February 7, 2023
BTS' main dancer is having his main character moment as his documentary will air on the streaming platform on February 17. The feature produced by...

She put the IDOL in Australian Idol

Clara Umali - February 7, 2023
This girl really put the IDOL in Australian Idol in her viral audition The outfit, the choreography, and the facial expressions were really all on...

Clara Umali - February 6, 2023
Now, you know how it feels The Internet apparently feels no remorse for Willie Revillame after he shared a statement about ALLTV's shows taking a...