For much of its promos, ‘Maid in Malacañang’ claims to add a new “truthful” perspective to the age-old narrative that the Marcoses were corrupt a*holes.

The film follows two points of view: one from the beleaguered Marcoses; the other from the kasambahays that stayed with the family before their ouster.

The Marcos storyline is everything you expect from a propaganda piece: They weren’t that bad, you guys.

Bongbong’s (Diego Loyzaga) ultimate dream is to gain his father’s approval. Imelda (Ruffa Guttierez) is a romantic who has separation anxiety with Malacañang, her home. Imee Marcos (Cristine Reyes), the film’s creative director and executive producer, is the film’s star who keeps the family together.

In fact, Imee usurps his father, Marcos Sr. (Montano), in terms of story and screentime. Montano, who devolves from playing Jose Rizal to the late dictator, is barely in the movie, save for a “heart to heart” scene with Bongbong. Maid in Malacañang’s definition of a “new” perspective is to grant the Marcoses a shred of humanity. They were alone and scared during their final moments – and they should be, as the people, tired of decades of corruption, were gearing to storm Malacañang.

Perhaps Maid’s biggest claim is that Marcos Sr, a despot and kleptocrat, was nothing more than a soft-spoken puppy, whose “niceties” were taken advantage of by opportunists and traitors.

However, Maid in Malacañang doesn’t offer any new evidence to support these claims. Much like YouTube propagandists, viewers are expected to take the characters’ words for it.

The Marcoses were for the people. Marcos Sr. wouldn’t hurt a fly. No leader is perfect, but he was the closest, his children assured. But why then are protesters amassing in EDSA? What led allies to turn against a “brilliant” man, who the film practically brands a saint? Trip lang nila?

Maid doesn’t try to dispel old narratives either. Ultimately, the film’s biggest contribution to the “truth” is that the Marcoses were human. They were anxious about being uprooted and ripped to pieces by the mob. They cared for each other.

Hitler probably loved his wife before his downfall. Bin Laden most likely had a family he cared for before he was gunned down. Humanized monsters are still monsters, regardless of their anxiety or daddy issues. 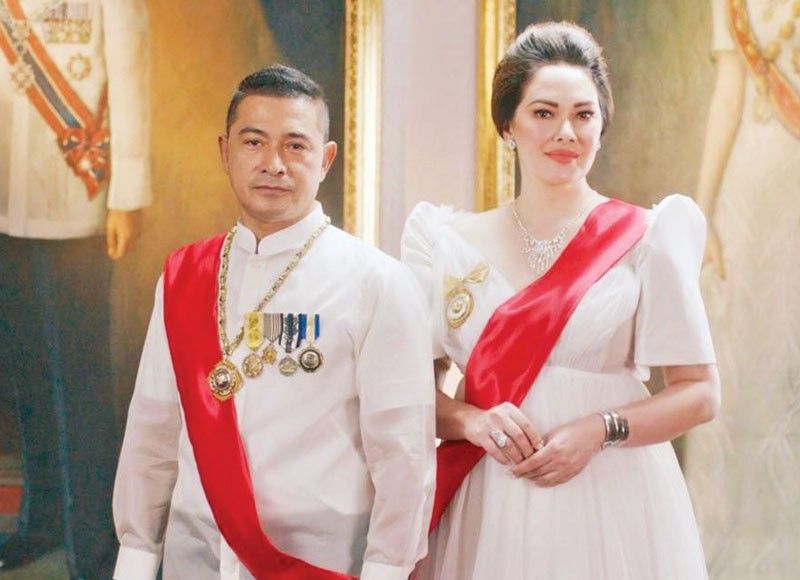 “Empowerment” as a tool for propaganda

The other half of the film’s narrative is “explored” through the eyes of three maids, played by Karla Estrada, Elizabeth Oropeza, and Beverly Salviejo.

The term “explored” is used loosely here. Save for a couple of scenes, the three are used as comic reliefs to offset the seriousness and heavy-handed glorification of the Marcoses.

And yet, by its end, Maid in Malacañang would like you to believe that the entire film was about honoring the three helpers, complete with a montage of pics of their real-life counterparts.

But only a few moments ago, Marcos Sr. branded Imee as the “true Maid in Malacañang”, citing her service to the family. Later on, it was also Imee who devised the plan to save employees from the mob. The maids also had a scene thanking Imelda for the gifts they received throughout the years. If there was a shining moment for the kasambahays, it was during a speech by Estrada and Oropeza, concluding that one’s job shouldn’t define a person’s worth – which is true.

People who make an honest living shouldn’t be discriminated against. This is a very important message in a country that looks down on service workers.

But even this empowering thought gives way to Oropeza crediting the Marcoses for the bloodless revolution since they chose to leave instead of fight. That true peace and harmony can only be achieved through “unity” (Yes, they managed to shoe-horn “pagkakaisa”).

For 95% of Maid in Malacañang, the Marcoses and their “good deeds” take the spotlight. But the film’s conclusion wants you to believe that it’s less of a propaganda piece, and more of a tribute to members of society that often get overlooked. Maid in Malacañang operates much like a teleserye: oppressed characters fight against insurmountable odds. Lots of crying, shouting, and a strong emphasis on family ties.

It also carries Yap’s “tell, don’t show” style, filled with heavy-handed references and long monologues with interjections of crass humor when there is a lull.

For all its faults, it tugs at the heartstrings and tickles the funny bone of its intended audience. The theatre we were in exploded in applause after the film ended, with one moviegoer shouting “TAMA!” whenever Marcos Sr. made a speech on the screen.

Maid in Malacañang is a fascinating look into the workings of an effective propaganda piece, and how these contents warp realities to enthrall followers to their “advocacy”.