Kids are not too young to learn about queer issues

When I was in fourth or fifth grade, I asked my father a then hypothetical question. “What would you do if any of your children were gay?”

He answered with a barely disguised contempt and impatience, “Walang lahi ng bakla sa pamilya natin.” I asked my mother the same question. She replied, “I don’t want my children to be anything that makes it harder for them to live in the world.”

At an early age, such statements, coupled with religious teachings on how a man is only meant for a woman and vice versa, taught me that being anything but straight was bad.

In the media that I consumed as a child, I have no recollection of openly LGBTQIA+ characters. If there were, they were often forced to hide or erase who they were, fearing exclusion or bullying. Some were background characters, showcasing “queer” characteristics that are never addressed or are ignored.

I remember the first time I realized I was also attracted to women. It was in late High School, and I was with a close friend. We were talking, laughing when a thought flickered in my head. Brief but loud.

“What if I wanted to kiss her?”

It shocked my system. And being the ‘good’ straight girl that I thought I was, I stifled that thought. I buried it deep in my mind because it didn’t fit the image my parents said I should be. I’ve had many crushes on men, but liking women in that way was seemingly unimaginable, impossible.

My story is not uncommon. I have many friends who keep their true identities a secret from judgmental relatives. I know people who have endured the discrimination that comes with exhibiting non-traditional, non-heteronormative behaviors. I didn’t want to go through that.

Today, I am lucky to have found a group of friends who are open about their identities and sexualities. One of them is an avid watcher of cartoons. Through her, I learned of Steven Universe.

Steven Universe is this beautifully animated show centered around the adventures of Steven and the Crystal Gems, magical alien humanoids who have sworn to protect Earth.

Aside from its intricate world-building, the portrayal of serious topics like war, colonization, and death (without dumbing it down), its inclusion of LGBTQIA+ characters and relationships changed the game for me, in that they were considered normal.

This Peabody awarded show featured the first animated lesbian wedding between Ruby and Sapphire (also known as the fusion, Garnet), the main characters whose relationship ups and downs were focal to the story.

Another show with great queer representation is She-Ra and the Princess of Power, a reboot of the 1985 animated series. The story follows the journey of Adora, who transforms into the tall and powerful She-Ra, and her circle of magical princesses as they fight against the evil Lord Hordak and his Horde.

Much like Steven Universe, this vibrant and action-packed show also features a cast of diverse characters. There’s Spinnerella and Netossa, two princesses in a loving lesbian relationship. There’s a non-binary performer/villain, Double Trouble. And of course, there’s the friends-to-enemies-to-lovers story arc between the titular characters, Adora and Catra. 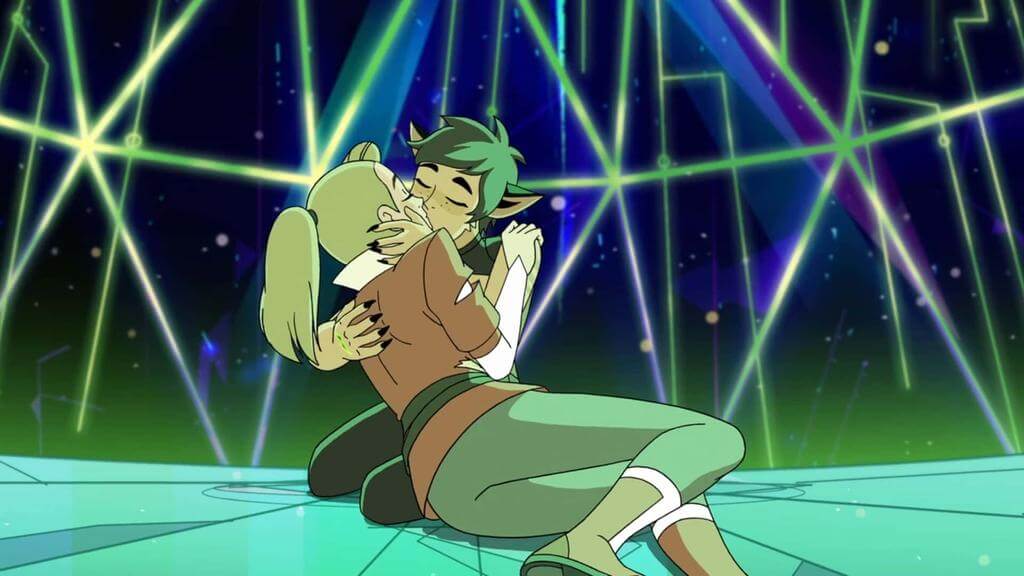 A more recent favorite of mine is Owl House, which centers on Luz Noceda (Disney’s first bisexual main lead), a human training to be a witch. Alongside crazy antics, Luz and her friends rebel against a mysterious organization that seeks to control their magic. We also meet Disney’s first non-binary character, bard/rebel leader, Raine Whispers.

I am happy to have found these shows. However, knowing of their existence does not erase the years of shame that I endured, a feeling that continues to this day. I see parents on the Internet (and in my family) arguing that children are way too young to learn about LGBTQIA+ realities and experiences, that they’re being brainwashed into becoming “gay.”

To counter this, I would like to cite a question by Tim Ramsey, “Was your child ever too young to learn about being straight?”

Queer people have been around for ages. We are just taught that being straight and cisgender is the default. When parents and family members create safe spaces for the discussion of LGBTQIA+ issues, it teaches children to be empathetic, to be compassionate, to embrace themselves and others for who they are.

When the media presents multi-faceted queer experiences (not just pain and tragedy), children of diverse identities are able to feel seen and heard. They are told that being allies or being part of this community is nothing to be ashamed of.

I am still in the process of exploring and accepting my queerness, a part of me that I’ve repressed since childhood. I am still unlearning years of internalized homophobia and transphobia.

But with the rise of more inclusive shows seemingly ‘made for kids,’ it gives me hope that perhaps a world where queerness is celebrated (not tolerated) need not be just fictional.